Let’s start with a few points. This is a 3D printer and an inexpensive one at that. It is like any other high priced technology in that it has a learning curve, it is temperamental, it can be fickle. When you first get a laptop, it takes awhile to learn the nuances, to learn how to get around. You have to load software and go through the settings to make things work the way you want them to. You can’t expect to buy a machine like this (and newer technology as well) and have it out of the box working exactly like you want it to the first time.

So having said that, I did have to spend a bit of time getting to know this printer. I’ve never used a 3D printer before but I feel I am pretty technically savvy. I’ve been using computers and peripherals since 1980 and I do graphic design on a computer all day. I’m not sure if that makes me any more qualified but I do understand that the items you’ll be printing are based on mathematical line drawings so maybe as I get into designing items, that will come in handy.

When the printer arrived, the outside of my box had a small indent. I was worried about the printer but it is carefully packed in corner Styrofoam pieces. Unpacking instructions were simple. Finding a place for it in my office was a little harder because although it has a similar sized footprint to my color laser printer, it is taller and I need easy access to it.

After it was set up and the software was installed on my computer, I loaded the filament and downloaded my first file to print. But I had issues. Luckily I have a friend with the same printer and he was gracious enough to share his knowledge of troubleshooting with me. We set the z offset (the space between the extruder and the print bed) and played with that a bit. It needs to be close but not so close that it can’t get the filament out. A rough guide is two thin sheets of paper should be able to go between the bed and the nozzle. So I tried printing again and I got a mess. My first few tries and the object started sliding around on the bed after the first few layers. Which meant that it was too far from the bed because it wasn’t laying it down well enough. So I adjusted the z-axis to be a little tighter. Tried again and the job started well but after about 1/4″ of printing started going weird. This is why you should keep an eye on your jobs. If they go south, you can cancel it. There is nothing worse than having an entire job print badly. I’ve included some pictures of the job that started good and went bad. You’ll see the honeycomb picture (the bottom) and the rough and undefined edges (the top). I put in a trouble ticket with XYZ and they responded via email with some suggestions. When I said I had already tried them, they set up a time frame to talk by phone. The calls originate from California and I’m east coast, so the morning was out. We did talk and they walked me through cleaning the nozzle. A simple process of removing the filament, reinserting it without the guide, cleaning the nozzle with the tool provided, turning the machine off and then on again, watching the temperature of the nozzle (under ‘monitor’ in the menu and when it got to 90 degrees, pulling the filament out. It came out with a little knob on the end – the part that was clogging the nozzle. I reloaded the filament correctly and started to print again. And it worked. That is the picture of the complete item – Jake the Dog from Adventure Time.

I did print a second job that didn’t work well the first time so I did a nozzle cleaning again and it has now been printing well for the past 3 hours. (It’s now done and I’ve added a photo). It is not perfect but I only printed in ‘good’ mode and it was pretty intricate.

So you need to know that this has a learning curve – like any technology. And it requires some maintenance, like any technology. It is affordable enough for a young person to start exploring the possibilities of 3D printing or for a family to begin learning how to create in this manner. It is not perfect but I’m sure that the $3,000 machines are not either. Now that I am not intimidated by it, that I have a better understanding of how it works, I am much more confident that I will have more and more fun with this.

Another note is that you do need to buy the XYZ Da Vinci Jr. filament to use in this printer. It may be a little more expensive than other filament but you get the printer at such a lower price that your initial savings are worth it. I have a color printer that originally cost about $200 but to replace all the cartridges is over $260, more than the cost of the printer. Why? Because that is how they recoup the actual cost to manufacture the color printer. It’s just the way it works. XYZ is not the first company to do this nor will it be the last.

My final words are these: I was provided a printer to test and review. I tested it out, as I always do, as if I invested my money and with a critical eye for the next person who might buy it. I was frustrated at first and I feel I have represented the printer and the issues fairly and accurately. 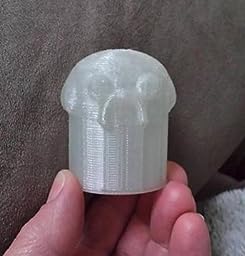